Celebrated: By Catholics since 1933 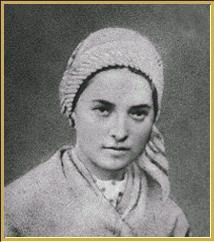 Bernadette Soubirous died of tuberculosis at the age of 35 on April 16, 1879. On February 11, 1858, when she was only 14 years old, she sat in a grotto to take her shoes off and saw a dazzling light, and a small lady in white. This lady, who never identified herself to Bernadette, appeared to her again three days later, and asked Bernadette to come back every day for a fortnight. This Bernadette did, and the apparition called for penance in the only language Bernadette spoke — a dialect of Occitan, a Romance language spoken in small areas of France, Spain and Italy. As a symbol of her repentance, Bernadette was to drink from the muddy spring in the grotto, and eat the plants that grew there — but as Bernadette did this, the waters ran clear.

Even at the time, people thought that Bernadette was crazy. The lady told Bernadette that a chapel should be built on the site, and Bernadette relayed this message to her parish priest. The priest asked for proof, as any of us would.

Bernadette had another vision, during which she held a candle until it burned all the way down — but did not burn her. During this vision, the lady finally identified herself. "I am the Immaculate Conception," she said, the one human being born without original sin, the link between the Almighty and us: Mary, the mother of Jesus.

Things can be true even if they never really happened (ask any novelist). Things don't need scientific explanations to be revelations. I am a gatherer of facts and a stickler for accurate reporting, but I understand that some truths cannot be contained in the physical.

This is always a tricky time of year for me — spiritually, financially, emotionally, every which way. The lovely and talented Claire Bea was born 27 years ago last week. It is tax time and spring time and Eastertide and in general a time of year when I tally up gains and losses, and measure what I have and who I am against the things I meant to do and the person (people, in fact) I wanted to be. But I look at the story of Bernadette and I see that things can sometimes be simple, and that in such simplicity we can find clarity, grace and healing.

The Catholic Church, which is more rigorous about these things than skeptics might believe, has confirmed 67 cures at Lourdes as having no reasonable medical explanation. Sixty-seven among tens of thousands might fall within the standard deviation; but what is a miracle, if not rare? And does a miracle exist at all if it goes unrecognized?

Our lives are full of miracles we no longer even notice, from internal combustion engines to ice in our cocktails. You may say that these are not miracles; they are simply things I'm too ignorant to understand.

And I would say: Exactly.

Posted by Ellen Clair Lamb at 6:38 PM No comments: